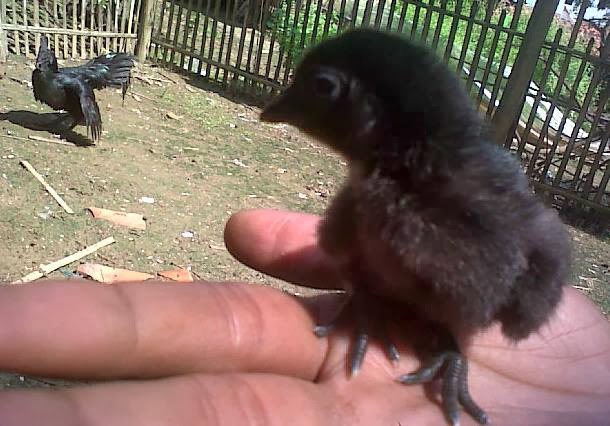 But if we look at some of the characters that the ayam cemani have, experts agree that  the Ayam cemani is  one of the 7 Indonesian jungle fowl line, including the type of partridge who live in parts of Indonesia, especially in Java Island.

Ayam Cemani is a type of partridge which has its own race. Black color that covered his entire body up to inside of the body organs, is because the ayam cemani have unique GEN  that makes it different with other breeds.

Makukuhan version of the legend states that the existence of  Ayam Cemani  in starting at the end of the Majapahit kingdom and brought into the kingdom of Demak by Ki Ageng Makukuhan.

One time while imprisoned in the Kedu, he was asked to treat a disease in Panembahan Hargo pikukuh son named latitude Katon using  pet chicken media.

The story is legendary in kedu and surrounding areas at this time. This is the story of many people to believe and follow the way that has been done that Ki Ageng Makukuhan treat disease using  Ayam Cemani as media.

Tjikromiharjo version mentions that ayam Cemai an introduction by the village head Kalikuto Grabag Sub District Magelang whos named is Tjokromiharjo who devote attention in the field of animal husbandry.

According to the magazine “Minggu Pagi” edition dated June 7, 1959 Tjokromiharjo got knowledge of animal husbandry courses and seminars held by Dr.. Douwess Dekker in 1919 in Bandung West Java and Results Correspondence with poultry experts from Colorado (USA) named Mr. Schelter.