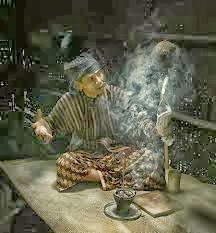 The Ayam Cemani is direct descendent of the Gallus, Gallus, the Wild Jungle Fowl of West Java, Indonesia. They are magnificent looking birds with extravagant plumage and a dignified stance. They symbolize formidable bearing.

Ayam Cemani is also keep the insect population under control and provide fertilizer for farms and gardens all over the world. The Ayam Cemani is a very curious bird, always aware of their environment. They symbolize knowledge, learning, reflection and observation.

This chicken breed is to be loved and protect their area and does’t like to be confined. They are tireless birds and always move. They are the teachers of the bird kingdom. They have an innate ability to sense danger. They define the ability to remain individual, individual and unique when existing among large groups.

They are has a good relationship with the Earths vibrations and atmosphere. The have a very high constant body temperature which remains about 101 degrees.   There hearts beat two-hundred and eighty to two-hundred and fifty times per minute. It takes twenty-four to twenty-six hours to lay an egg.

For century’s shamans, priestesses, spiritualists and practitioners of the occult have used Ayam Cemani animal pearls to transfer the powerful magical energy of the Ayam Cemani to themselves and to others in need of this commanding animal magic.

Ayam Cemani pearls are highly sought after by any wishing to absorb Ayam Cemani like virtues into their lives and develop stronger mental abilities such as those embodied by this magnificent creature. The owner of a Ayam Cemani pearl will see their lives, spiritual energy and mental clarity imbued with all of the virtues attributed to the “Teacher” of the bird kingdom, the Ayam Cemani.

The birds has a strong spirit indeed and its magical properties are one of the most influential of all animal totems. The power of knowledge, the spirit of learning, the ability to teach others, and so much more can be integrated into the spirit of the possessor of this magical pearl and The Ayam Cemani Totem.